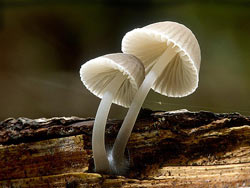 Recent research of certain medicinal mushrooms has proven that they have a powerful positive effect on the health of the central and peripheral nervous system, in accordance with well known properties recognized long ago in traditional Eastern medicine and confirmed through long-term use. While some traditional Chinese medicines had a beneficial effect against “nervous diseases, insomnia, anxiety and brain functioning diseases that appear with old age”, modern scientific research has revealed some of the mechanisms, thereby allowing for the optimization of preparations to improve their efficacy.

Some medicinal mushrooms, such as Hericium erinaceus, contain the compounds hericenone and erinacine. These compounds have proven in vivo to be the strongest known stimulators for the secretion of nerve growth factor (NGF). They pass easily through the blood-brain barrier and within the brain act on the astroglial cells that supply the neurons, thus stimulating them to secrete NGF. In vitro studies have proven that NGF is one of the most important factors for the repair and creation of new neurons.

Other active compounds (xylane, heteroxylane, proteoglycans, beta-glucanes, nucleosides, tyrosinases…) found in mushrooms such as Lentinus edodes (shiitake), Ganoderma lucidum (reishi) and others strongly improve microcirculation in the brain by expanding the blood vessels and preventing their loss of elasticity. Extracts from certain mushroom species have also shown to have a stimulatory effect on the work of specific neuron groups, particularly those in the region of the hippocampus, which is responsible for learning and memory. Furthermore, active compounds from some mushroom species positively regulate the work of various neurotransmitter systems in the brain, including the acetylcholine, dopamine, serotonin, norepinephrin systems and others. Another important effect is the harmonization of the work of the immune system which is, according to some research, key in the emergence of many neurodegenerative disorders.

Neurodegenerative diseases are common. Various dementias, Alzheimer’s disease, Parkinson’s disease, multiple sclerosis and many others attack the nervous system, inhibiting and limiting its functioning and drastically reducing the quality of life for those suffering from these diseases, and for those caring for them. The causes are numerous and not yet sufficiently explained, from prions, infections, trauma, imbalances in the neurotransmitter systems, autoimmune defects and genetic predisposition, to environmental pollution and accumulative oxidative damage. For many of these diseases, the diagnosis is still neither reliable nor timely, and the existing treatments are aimed only at slowing the damage and easing symptoms, and can often have unpleasant side effects.

Research conducted by numerous Japanese, American, Chinese, Russian and other scientists, from H. Kawagishi, Furukawa, Ishiguro, Gao, Zhuang, Knusel, Shnidman, Sass, Brodney and many others, have proven the activity of the compounds of medicinal mushrooms on cells, and in test animals. Furthermore, several clinical trials have been held in Japan. After six months of use of the traditional medical, significant and very significant improvements were recorded in all patients.

Contact us by phone, fax, or e-mail if you have any questions about our products or need advice on their use!

We recommend continuous use lasting 2-6 months or longer.